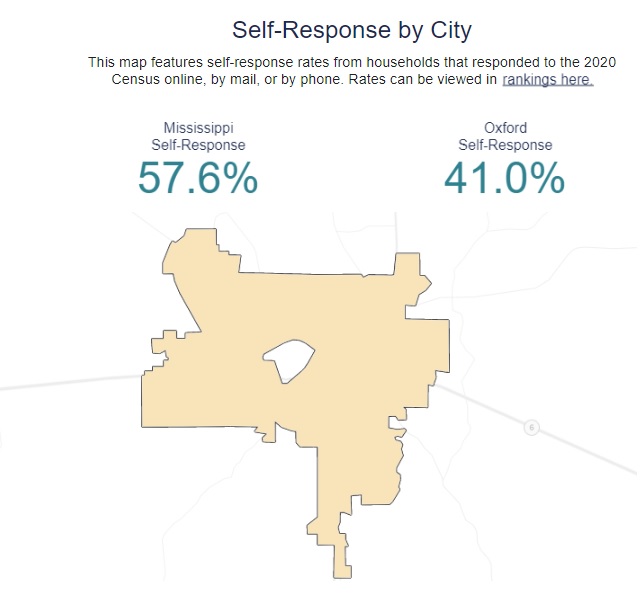 Oxford’s Response Rate for Census Only Increased 2% Since May

Oxford ranked 225 out of 298 Mississippi cities.

Of the cities with a population of more than 5,000, Oxford has the lowest response rate in the entire state. Lafayette County’s response rate is 64th out of 82 in the state and the lowest in the 22-county Northern Congressional district.

The deadline for the Census, which occurs every 10 years, has been moved to August.

In 2010, more than 265,000 Mississippi residents were not counted which resulted in more than $13 billion dollars the state missed out on from federal sources.

Mississippi could possibly lose an average of $2,780 per year for every child not counted in the 2020 Census.

According to Oxford-Lafayette County Chamber of Commerce President Jon Maynard, businesses often use census data to decide where to build factories, offices and stores.

Federal funds, grants and support to states, counties and communities are based on population totals and breakdowns by sex, age, race and other factors.

The results of the census also determine the number of seats each state will have in the U.S. House of Representatives, and they are used to draw congressional and state legislative districts.

The household count should include anyone living at the residence on April 1, 2020, and include all adults, children, babies, foster children and non-relatives.

This is the first year that U.S. Citizens can fill out the Census online. Census forms were mailed out to each household in March. The Census can also be completed on the phone by calling 844-330-2020.