The Ole Miss men’s basketball team announced its non-conference slate for the upcoming 2020-21 season on Thursday. The Rebels will welcome eight teams into the Pavilion and take on five teams on the road prior to stepping into conference action in the SEC.

Head coach Kermit Davis will have a veteran squad on the court, including four starters—KJ Buffen, Blake Hinson, Devontae Shuler, and Khadim Sy—from last year’s squad along with two of the top graduate transfers (Dimencio Vaughn, Romello White) in the country.

The Rebels open the season with three straight home games, starting with a matchup against New Orleans (Nov. 10). The Rebels welcome North Carolina A&T to Oxford for a Sunday contest (Nov. 15) before closing out the homestand by hosting Charleston Southern (Nov. 18).

“We have put together a challenging non-conference schedule that will prepare us for SEC play and give us great opportunities to build an NCAA Tournament resume,” Davis said. “With our guys returning to campus in the coming weeks, I can’t wait to start and get ready for the upcoming season.”

Once again participating in a tournament during Thanksgiving week, the Rebels leave the country for three games in the Cayman Islands Classic (Nov. 23-25). Entering its fourth year of existence, the Cayman Islands Classic has arguably its best field yet. Joining the Rebels will be Kansas State, La Salle, Miami, Nevada, Northern Iowa, Oregon State and Western Kentucky. Ole Miss has traveled outside the continental United States to play in tournaments five times over the past decade. While this will be the Rebels’ first trip to the Cayman Islands, they have played in Cancun, Mexico (2010), the U.S. Virgin Islands (2011, 2016) and Honolulu, Hawaii (2012).

Tipping off the month of December, Ole Miss returns home to host Rider (Dec. 1), the former team of graduate transfer Dimencio Vaughn. On the first Saturday of the month (Dec. 5), a rivalry is renewed as the Rebels battle Memphis on Craddock Court. One week later (Dec. 12), UNCW makes the trip to Oxford.

Back-to-back road games begin with Ole Miss traveling north to face Davis’ former team, Middle Tennessee (Dec. 16). It marks the first time Davis leads a visiting team into Murfreesboro, Tennessee after spending 16 seasons as head coach of the Blue Raiders. The two programs meet for the fifth straight season with Davis the victorious coach in each of the previous four matchups, twice at Middle Tennessee (2016, 2017) as well as the past two seasons at Ole Miss (2018, 2019). Three days later (Dec. 19), Ole Miss heads to Ohio to square off against Dayton. The Flyers are coming off a historic 29-2 season, finishing the year ranked No. 3 in the country. The home-and-home series was announced earlier this week.

Three days before Christmas (Dec. 22), Ole Miss hosts UT Martin for the final game of the 2020 calendar year. Following the holiday break, the Rebels ring in the new year and wrap up non-conference play by welcoming Wichita State to The Pavilion (Jan. 2). The matchup against the Shockers is part of a scheduling alliance with the SEC and the American Athletic Conference. Participating schools play a home-and-home series, which began last season when the Rebels traveled to Kansas. 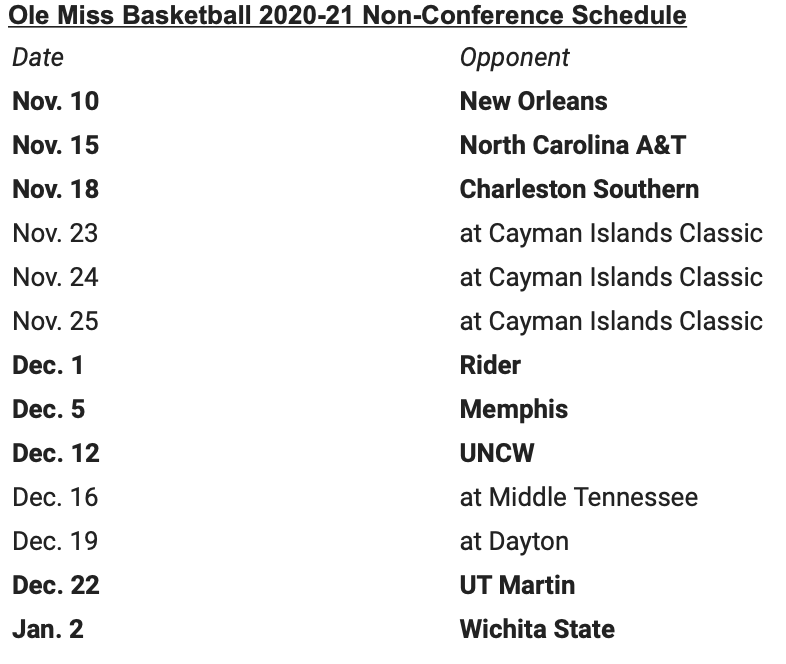