In 1961, Mickey Mantle and Roger Maris were the stars of the New York Yankees. When they hit a home run, the roar of fans filled the stadium. During that era, one of their biggest fans was a little girl in Lexington, Mississippi, filling her living room with her and her father’s roar and love for the game.

Sarah Lacy, the little girl from Lexington, developed a deep appreciation for sports at a young age, a love that grew with time. As a high school student, she started to keep score for her school’s baseball team. This is where she found her passion for scorekeeping and being a part of the teams she loved cheering for.

After graduating from Mississippi State College for Women in Columbus, now Mississippi University for Women, with a bachelor of science in mathematics, Lacy moved to Oxford in 1968. She soon landed her first job as a long-term substitute math teacher. In 1972, she began as the biology teacher at Oxford Junior High School. Later she was transferred to Oxford High in 1987. Lacy has received multiple degrees, including a Ph.D. from the University of Mississippi in secondary curriculum and instruction.

As a teacher in Oxford, she was dedicated to supporting her kids in the classroom as well as on the field. In the late 1970s, Oxford High School lost its scorekeeper. Because of her experience and love for the game, Lacy was the first to step up to take on the new role. She was the scorekeeper for football, baseball, basketball, and track. Lacy said when she started keeping score for the girls’ basketball team, the games were six on six.

Lacy kept the scorebooks for 48 years at Oxford. Throughout those 48 years, she has seen triumphant wins, troubling losses, signing days, and some students go on to play at the highest level in sports.

“The most memorable moments have been the state championships and games we were not supposed to win (that we did),” she said.

She was referring to games like the one in 1989 where Oxford High School beat Pearl in the football playoffs when Pearl was picked to win the championship. Lacy said that game “was a turning point in OHS sports.”

Lacy said one of her all-time favorites happened just this past year when OHS football took home the Class 6A state championship. Oxford defeated Oak Grove 31-21 in a game played at the University of Southern Mississippi. The Chargers trailed 21-3 at halftime before outscoring the Warriors 28-0 in the second half.

Lacy loved working with the coaches of all those teams through the years, such as Dennis Dupree, Robert Youngblood, Brian Harvey, and Roger Smith, just to name a few. She has treasured the various rings and pendants of past state championships that she has been a part of.

As we know, with great victories sometimes come great losses. Lacy has seen some heartbreaking moments for Oxford sports and her beloved teams. One of the toughest moments she witnessed was in 1989 when the football team lost to Louisville in the North Half playoff. The Chargers had never made it that far and they lost due to a bad call, the worst-case scenario for any sports fan.

“Going to the locker room after that game broke my heart,” she said. “Brian Harvey was (a player) on that team, and I can still see the look on his face that night.”

The relationships she formed with the coaches and the teams are what kept her motivated throughout her career.

“The coaches are some of my best friends,” she said.

After 48 years, Sarah Lacy is now retired from teaching.

She has always prided herself on knowing every player on every sports team at Oxford High School.

Lacy has grown to love each of these players as if they were her own, celebrating milestones with them as they grow up. When asked about some of Oxford High School’s alumni standouts such as DK Metcalf, Jarkel Joiner, and Jack Abraham, players who are now playing at the college or professional level, Lacy said, “I don’t think people know how special these young men are.”

Teachers always develop special relationships with their students. Sarah Lacy said that “my special kids are not limited to those that played sports. All of my students are my kids.”

In 1962 Sarah Lacy had the opportunity with her father to see the New York Yankees play. She never got to see her idols hit one of their infamous home runs with her own eyes, but little did she know the best victories that she would witness were yet to come.

A love that was born in her childhood living room grew and evolved into a 48-year long career of being Oxford High School’s biggest fan. 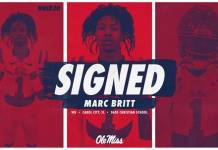 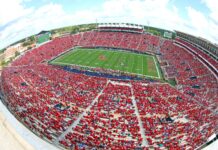