With Oxford and Lafayette County citizens doing their part in preventing the spread of COVID-19 by staying home, self-quarantining and social distancing has also helped to lower crime, which has resulted in fewer arrests.

“Our call volume is definitely a lot lower,” said OPD Chief Jeff McCutchen. “We’re not seeing as many people out and about. Our community is doing a good job in following the CDC guidelines and the resolutions passed by the Mayor and Board of Aldermen.

Lafayette County Sheriff Joey East said his department is also responding to fewer calls with so many University of Mississippi students gone and bars being closed.

“Law enforcement also understands the stress everyone is under, so we are doing our part as well. We are still out here enforcing the law, but we are using more discretion now,” he said. 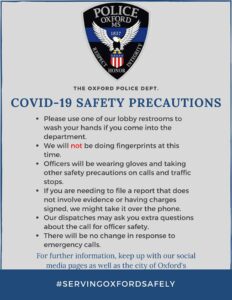 Both OPD and LCSD are taking more reports by phone when possible. McCutchen said officers have been instructed to stay in their vehicle as much as possible and limit traffic stops.

“There are very few reasons we’ll be doing traffic stops right now,” McCutchen said. “Our job is to protect the community but we have to be smart about it as well.”

The sheriff’s department has asked all local law enforcement agencies that bring arrestees to the Detention Center to consider using alternative ways rather than arrests, such as issuing citations that order the person to appear in court, commonly called noncustodial arrests.

East said 911 dispatchers are asking callers questions before sending officers to a scene that include:

“When we do go to a residence, we will ask the caller to come outside if possible to speak with the deputy,” East said. “All deputies and staff have protective gear with them if needed. Our agency has been updating our deputies and staff on safety precautions and preventive measures weekly if not daily. We have implemented strategies and procedures to try and help our staff stay as safe as possible.”

McCutchen said OPD has separated the office areas from where patrol officers come into the OPD to do paperwork. 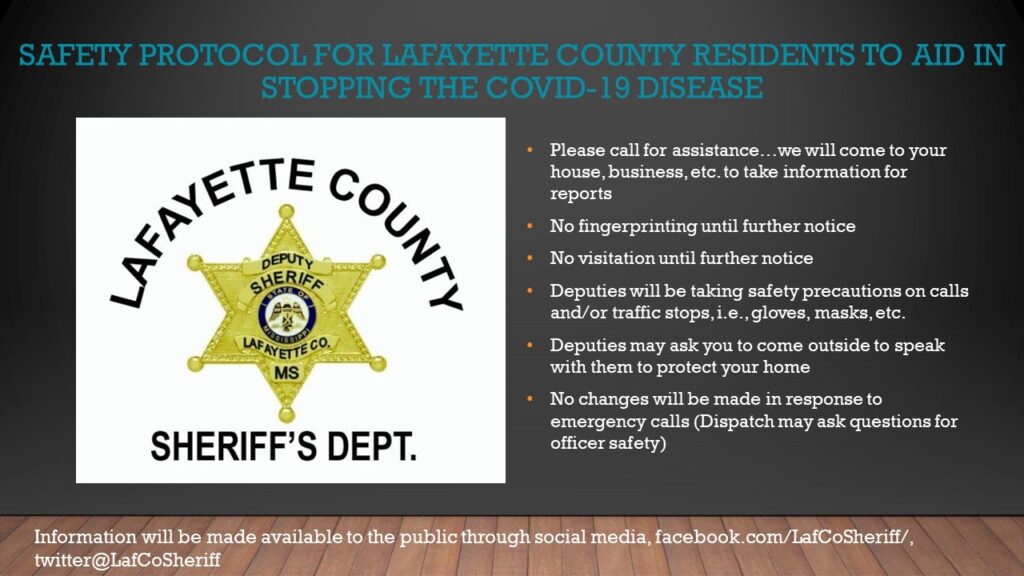 A new role for local law enforcement is checking on local businesses to make sure they are complying with the resolutions passed by both the city and county that mandate restaurants close dining areas and use the curbside pick-up and delivery services.

McCutchen said so far, most businesses have been complying.

“The first day, some had questions or there was a communication issue,” he said. “We offered some ideas and tips for retail stores on how to use curbside pick-up. Restaurants are a bit more used to that type of service, but retail stores aren’t. But everyone is doing a really good job of figuring it out.”

While officers may be responding to fewer calls, they’re still keeping busy. OPD officers have been helping senior citizens shop at Kroger and CashSaver each morning. Both grocery stores have implemented a senior/at-risk hour in the morning, limiting who can shop in the store during that hour.

“We help them shop if they need it,” McCutchen said. “But most shop themselves but ask for help to put the groceries in their car so they can get home as quickly as possible.”