Some movies make us laugh while others can make us ugly cry. It’s a bit more rare, however, that a movie can make us so angry it changes our lives.

For investigative reporter Jerry Mitchell, the anger he felt after watching “Mississippi Burning,” put him on a path that not only changed his life but brought justice to those who too long evaded it and set the ball in motion to change countless lives.

On Tuesday, Mitchell’s book, “Race Against Time,” will hit the shelves, and on Wednesday, he’ll be at Square Books in Oxford for a book signing.

Mitchell was a reporter at the Clarion-Ledger in 1989 when he attended a screening of “Mississippi Burning,” that was loosely based on the investigation into the deaths of three civil rights workers.

Also attending the screening were two retired FBI agents and a journalist who spoke about what “really happened.”

“Everyone left and I stuck around to talk to these three old guys,” Mitchell said.

On June 21, 1964, more than 20 Klansmen murdered three civil rights workers. The killings, in what would become known as the “Mississippi Burning” case, were among the most brazen acts of violence during the civil rights movement. No one was charged with murder in the months and years that followed, despite many knowing who the killers were.

Within days of the movie screening, Mitchell started his investigation into the murders. 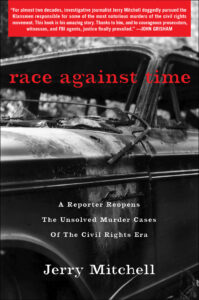 Over the next several years, Mitchell played a central role in bringing the killers to justice for the assassination of Medgar Evers, the firebombing of Vernon Dahmer, the 16th Street Church bombing in Birmingham and the Mississippi Burning case, according to Simon & Schuster Publishing. In “Race Against Time,” Mitchell reveals how he unearthed secret documents, found long-lost suspects and witnesses, building up evidence strong enough to take on the Klan. His efforts have put four leading Klansmen behind bars, years after they thought they had gotten away with murder.

In 1996, Mitchell was portrayed by Jerry Levine in the Rob Reiner film, “Ghosts of Mississippi,” about the murder of Evers and the belated effort to bring killer Byron De La Beckwith to justice.

“I had lunch with Rob Reiner twice,” Mitchell said.

As his articles started to be published, not everyone was thrilled with Mitchell’s effort to bring justice to the old cases.

The Oxford book signing is the second stop in a 20-city, five-week book tour. Choosing Oxford for his signing was an easy choice for Mitchell who spent two years covering Oxford and north Mississippi while being the Northeast Bureau reporter for the Clarion-Ledger in 1986 and 1987.

“What more can you say about Square Books?” Mitchell said. “Richard Howorth (owner of Square Books) is legendary.”

The book has taken almost 30 years to write, Mitchell said. He signed the deal with Simon & Schuster in 2009.

“The book really started to take its current form in 2014,” Mitchell said.

For his investigative work, Mitchell has won more than 20 national awards, including a MacArthur Foundation genius grant and the Sigma Delta Chi Award for Public Service. In 2006, he was named a Pulitzer Prize finalist.

While all authors want people to buy, read and enjoy their books, Mitchell says his book, “Race Against Time,” is a book that people need to read.

“I know it’s important,” he said. “Not because I wrote it, but because of what it talks about. It talks about an important time in this country, the injustice that took place and no one did anything about it.”

In 2018, Mitchell formed the Mississippi Center for Investigate Reporting – a nonprofit news organization that reports on the criminal justice system, public education funding, prisons, public corruption, political cronyism, generational poverty, health woes, racial disparities or a host of other issues. Most recently, the online news site has focused on the problems within the Mississippi prison system.

“Mississippi has been hard hit by shrinking newsrooms,” he said. “Vanishing in some cases and they don’t have the manpower to really focus on these deeper issues. We try to provide them with that content.”