*Story Update: Ole Coop was not able to open Tuesday, Jan. 27. The owner said the wing and sandwich restaurant should open at 4 p.m. Thursday, Jan. 30.

It might have a new name, but Ole Coop, set to open in Oxford on Tuesday, promises to serve up the same wings and sandwiches as its predecessor Coop DeVille.

They can make that promise because they have one very special ingredient – Ms. Charlotte.

Charlotte Campbell worked for the original Coop Deville for 23 years and has worked another three years with Codey Brassfield – former manager of Coop Deville and owner of Ms. C’s in Water Valley, and now, Ole Coop that moved into the former Lenny’s building on West Jackson Avenue. 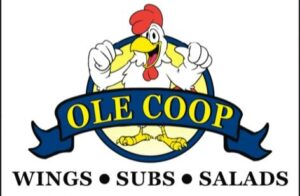 Campbell has worked in Water Valley running Ms. C’s with her daughter, Rosey King, but will be running the kitchen in the new Oxford location. She said she’s looking forward to seeing old friends and making new ones while cooking great food.

“I try to make food the way I would want it if I was ordering it,” she said. “And do it with a lot of love.”

After Coop Deville closed down in 2016, Brassfield opened Lambros in Batesville, a wing, sub and sandwich shop. In March 2018, he opened Ms. C’s in Water Valley.

“I had been wanting to get back in Oxford for a while now but I’ve been waiting on the right spot,” Brassfield said.

When he heard Lenny’s was closing, he knew he found the right spot.

And it’s not an unfamiliar spot. Coop Deville operated across the street (where Fashion Nail Spa is currently) for several years before it closed.

Ole Coop will offer the same wing flavors, including the ever-popular lemon pepper and honey gold, sandwiches like the Bacon Ranchero and Buffalo Bill, along with salads, tenders and chicken nuggets.

The restaurant has plenty of seating for those who wish to dine inside, and takeout is also available. Brassfield said they will start delivery service in the next few weeks.

“Our goal is to eventually open for lunch during the week,” Brassfield said.