The Faculty Senate of the University of Mississippi voted Thursday night that they have no confidence or trust in the Institution of Higher Learning in an extraordinary meeting that led to a more than three hour-long executive session.

The resolution they passed states that the Faculty Senate has no confidence in the IHL and its process of how it selected Glenn Boyce as chancellor.

Heading into Thursday’s meeting, two resolutions were proposed. One of the proposed resolutions for Thursday’s meeting included verbiage that called for conversation from the seven other institutions’ Faculty Senates the IHL oversees along with the Associated Student Body, Alumni Association, and all other stakeholders. It continued that they would call on their state representatives to initiate a constitutional amendment to abolish the IHL.

In order to abolish the IHL, it would take a two-thirds vote from the House and Senate, and then it would be placed on a ballot for the residents of Mississippi to decide.

Another route that could be taken by those who want to see IHL abolished or radically changed would be to try to get it on the ballot as an initiative.

After receiving a timeline graphic from the Institution of Higher Learning regarding the hiring process of now Chancellor Glenn Boyce, the Faculty Senate gathered in the auditorium of the Thad Cochran Research Center to discuss two proposed resolutions.

The two resolutions included a “no confidence” vote along with a call to abolish the IHL by calling on the other seven institutions the IHL governs.

However, the now passed resolution joins the two proposed resolutions into one, including amendments and verbiage of the proposed two.

The extraordinary meeting comes off the heels of the senate passing a resolution Tuesday, Oct. 8, in which it demanded a “complete and detailed accounting, including a detailed timeline” in the hiring process of Boyce.

The resolution demanded the IHL present the senate with the information no later than Tuesday, Oct. 15, by 5 p.m.

The IHL submitted the information before the demanded due date. It released a press release on Monday, Oct. 14, in which it included a brief description of the hiring process and a timeline graphic.

However, Faculty Senate Chair Meagen Rosenthal said the IHL did not directly submit the information to the senate.

“This information was sent to the Faculty Senate by a member of the press,” Rosenthal said. “We did not receive any of this correspondence directly.” 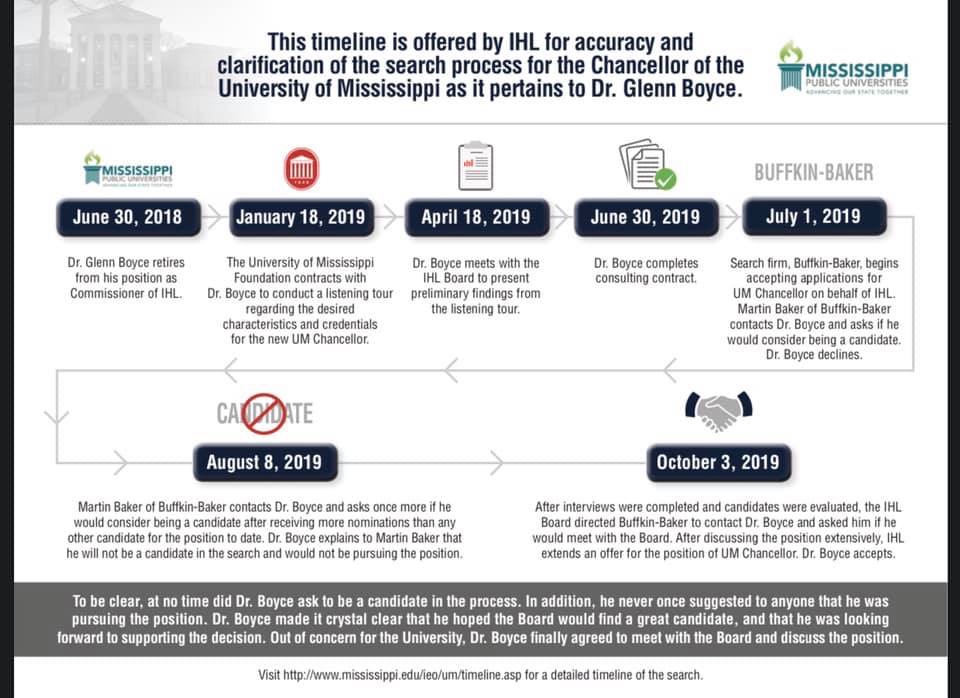 On Wednesday, Oct 17, the IHL released an additional statement regarding the already growing tension surround the governing body and the hiring process of Boyce.

“The Board of Trustees has heard the concerns of the University of Mississippi campus community regarding the chancellor search process. We will review our search process to determine ways that it can be improved. It is unfortunate that the process has reflected negatively on the beginning of Dr. Boyce’s tenure, but we look forward to Ole Miss thriving under his leadership.”

The statement was signed by all members of the IHL’s Board of Trustees.

Prior to going into an executive session, where the senate would discuss the proposed resolutions in confidence, the provided information from the IHL was discussed on the floor.

The other proposed resolution on the agenda for Thursday’s meeting was one that included verbiage calling for “no confidence” in the IHL and that the governing body violated its own rules.

Brad Jones, chair of committee on university services, said according to the IHL’s bylines, it had the authority to suspend its own rules during the search process, therefore it did not violate any of its own rules.

According to the IHL’s bylaws for searching for an institutional executive officer or commissioner (201.0509) Section E:

“Recruitment of candidates may occur up to the point of selection, but candidates will be advised to submit their materials by a specified date to insure optimum consideration for the position. At any point in the search process the Board may add additional candidates to the pool being considered without starting the entire process over.”

Although this argument was not settled prior to the executive session, Jones also brought attention to the nomination requirement—one of the initial steps in the chancellor search.

Jones poised the question on how many nominations each potential candidate received and who had the ability to nominate. He asked whether those nominations came from the Campus Search Advisory Committee (CSAC) or elsewhere. However, when the IHL initially announced the chancellor search, it stated nominations could be submitted from anyone in the community.

Conor Dowling, associate professor of political science and substitute representative of Thursday’s meeting, said he had sent a Freedom of Information Act Request (FOIA) to the IHL asking specifically how many nominations each candidate received.

The IHL responded stating all nominations were confidential due to Mississippi code 25-1-100 that protects certain personnel records; however, he said 20 minutes later he received a follow up email in which the IHL stated it did not have any records in response to his request.

The Faculty Senate finished its discussion regarding the IHL’s submitted information for Boyce’s hire, but was met with a motion to enter an executive session to continue the conversation regarding the proposed two resolutions.

Mississippi Institutions’ History of ‘No Confidence’

The University of Mississippi’s Faculty Senate’s vote on “No Confidence” would not be the first among institutions in the state.

Two other universities’ Faculty Senates have also voted “No Confidence” resolutions in the past 15 years: University of Southern Mississippi (USM) and Mississippi Valley State University (MVSU).

In 2004, in a closed door meeting, the USM Faculty Senate voted no confidence in former president Shelby Thames.

According to the Associated Press, the vote came due to concerns that Newman had problems “following rules, using the proper chain of command, pay scale and a lack of professional courtesy.”

Prior to the Faculty Senate’s meeting, Boyce released his first announcement to the UM community.

“As my first week on the job winds down, I want to reach out to you to state what a distinct honor and privilege it is to serve as the 18th chancellor of the University of Mississippi,” Boyce’s statement read.

Boyce addressed his connections with the university and how his family has deep ties into the institution.

He also addressed the growing concerns around his appointment and recent protests.

“In the last two weeks, it hasn’t escaped me that there are passionate feelings about who leads the University of Mississippi. And rightly so. I’m passionate about that as well. I just hope that the people who care about this university will judge my tenure as chancellor based on the results that we deliver.”

On Friday, Oct. 4, after the formal announcement of Boyce was cancelled due to protestors, Boyce and Dr. Ford Dye, IHL vice-president, conducted a media conference call with the media where he addressed the growing concerns regarding his appointment to the chancellorship.

He said he understood and recognized the students exercised the First Amendment and their freedom of expression.

“It’s also important at some point when we have civil discourse and conversation and the venue requires respect that we eventually come around to that respect as well so the venue itself can conduct its business,” Boyce said.