The Mississippi Writers Trail will commemorate the literary contributions of Oxford native William Faulkner with an unveiling of a marker in his honor at Rowan Oak on Oct. 10 at 4 p.m.

The unveiling will reveal the permanent marker positioned in front of Rowan Oak, Faulkner’s home. It will honor the novelist and Nobel Prize recipient for his literary works during his life in Lafayette County. 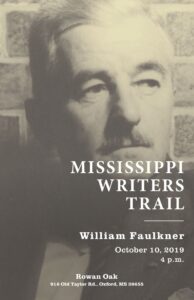 “For years now the Mississippi Blues Trail has made me proud of the rich cultural heritage of our state,” said Jay Watson, Howry Professor of Faulkner Studies. “It’s high time we honored our literary giants in the same way, starting with two of the greatest, Eudora Welty, and now William Faulkner. This is an auspicious moment for Mississippi.”

The William Faulkner marker is fully funded by the National Endowment of the Humanities, an independent federal agency that is devoted to upholding research, education, preservation and public programs in the humanities.

In addition to the Faulkner Writers Trail marker unveiling, there will be a screening of “Intruder in the Dust,” a film based on the novel by Faulkner, to celebrate the 70th anniversary of the screening.

There will also be various Faulkner and literary-related events held Oct. 10-14 called “A Literary Bit of Faulkner.” The events will include “Bitters & Bites Cocktail Class: Library Edition” where attendees will create literary inspired cocktails with bartenders from local restaurants; “Flash Faulkner Writing Contest” sponsored by Oxford Magazine and “Pop Up Faulkner Exhibit” featuring works by Faulkner’s mother and brother.

For more information on the weekend events or to purchase tickets, visit the Yoknapatawpha Arts Council website.