Ole Miss baseball announced the 2020 slate on Tuesday; the Rebels will take the diamond against 32 teams that made the NCAA tournament last season.

Ole Miss will welcome the Louisville Cardinals into Swayze for a three-game set (Feb. 14-16). That series will be the first of eight straight games at home to start the season, concluding with the first of two games against Southern Miss (Feb. 25). The Golden Eagles are one of eight teams the Rebels will face that won 40 or more games in 2019.

After that key early midweek matchup, the Rebels will hit the road for the first time for the Keith LeClair Classic (Feb. 28-Mar. 1), hosted by East Carolina University (ECU). Ole Miss will take on High Point, ECU and Indiana over the weekend in Greenville, North Carolina. ECU is one of seven teams on the Rebel schedule who made the Super Regionals last season, while Indiana is one of 12 NCAA Tournament qualifiers on the 2020 slate.

The month of April will start at Swayze against South Carolina before traveling to Starkville, Miss. to take on the Mississippi Bulldogs (Apr. 9-11) before returning home to host defending national champion Vanderbilt (Apr. 17-19). Next, the Rebels and Bulldogs will meet once again for a non-conference matchup in Pearl for the Governor’s Cup (Apr. 21).

A long stretch away from Swayze follows as Ole Miss will take on a pair of SEC East powers on the road at Florida (Apr. 24-26) and Georgia (May 1-3). The Rebels then return home to host Auburn for senior weekend (May 8-10). That series will be the Rebels’ fifth against 2019 College World Series teams.

Ole Miss will close its 2020 regular season in Tuscaloosa with a three-game series at Alabama (May 14-16). The Rebels will then return to Hoover, Alabama, where they will look for a third-straight trip to the SEC Tournament title game (May 19-24). 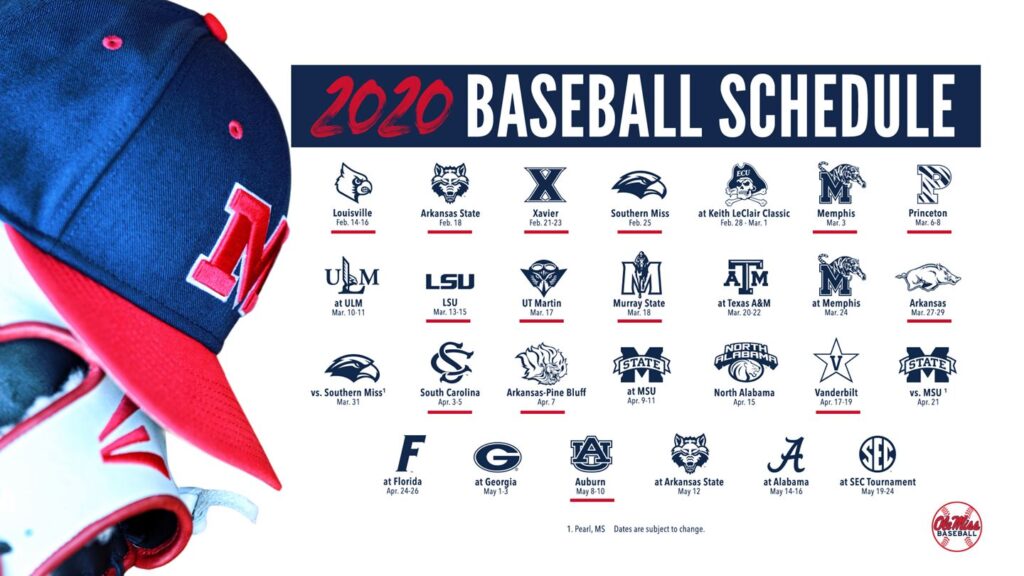