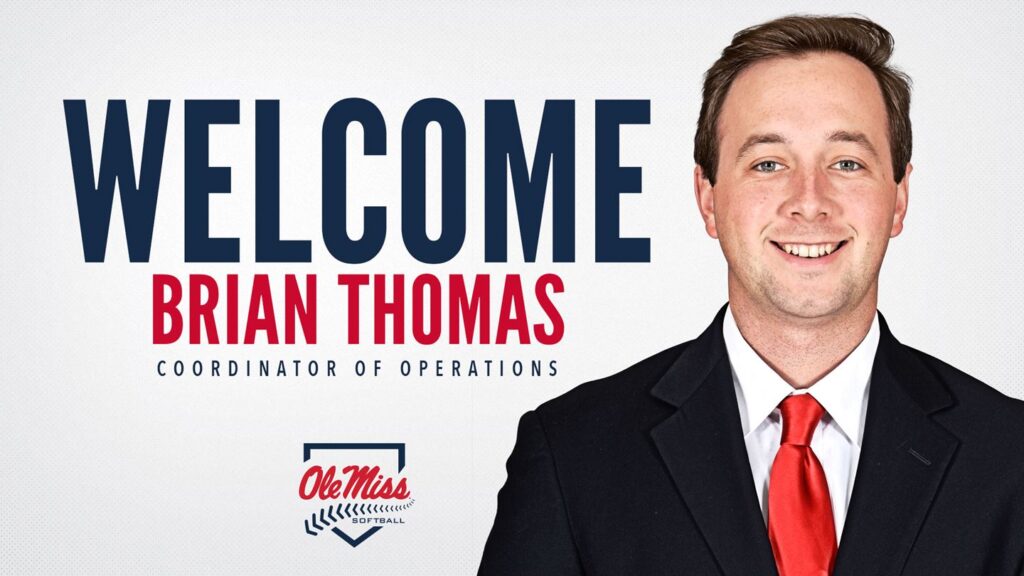 Ole Miss softball announced the addition of Brian Thomas to the staff on Friday as the Rebels’ coordinator of operations.

Prior to arriving in Oxford, Thomas came from Florida Atlantic where he served as the director of operations for the Owl baseball team for two years while earning his master’s degree in higher education leadership.

In his role, Thomas will be responsible for the day-to-day office operations of the softball program. His duties include assisting with the Rebels’ camps throughout the year, team travel and equipment operations.

Prior to his time with the FAU baseball program, Thomas was the varsity pitching coach at Gainesville High School in Gainesville, Florida. During his year with the Purple Hurricanes, the program earned their best season in 10 years with a 19-6 record. He handled all facets of the pitching staff, including throwing and conditioning as well as the players’ developmental needs.

Thomas also served one summer as pitching coach for the Richmond Jazz of the Great Lakes Summer Collegiate League. There, he was the team’s first-base coach. The year prior, Thomas began his coaching career as the pitching coach at Oak Hill High School, also in Gainesville.

Thomas graduated from and played for Santa Fe High School in Alachua, Florida. Four times he earned all-area honors, eventually going on to play at St. Johns River State College. There, he was a member of the FCSAA All-Academic Team and earned the Mid-Florida Conference Scholar-Athlete Award.

Medical Marijuana for Mississippi? It’s Now Up to the Voters to Decide