Oxford and Lafayette County officials and members of the LOU community gathered at the Oxford Orthopedic Indoor Practice Facility Thursday afternoon to unveil a plaque for the West Oxford Loop Extension bearing the name of one of Oxford’s former mayors.

Mayor Robyn Tannehill presented the ‘George G “Pat” Patterson Parkway’ plaque to former mayor Pat Patterson after she read a resolution on behalf of the city of Oxford and Lafayette County regarding the work Patterson has done for the community.

The resolution noted that Patterson spearheaded not only the West Oxford Loop Ext., but he also played pivotal roles in the downtown parking garage and the Ulysses “Coach” Howell Activity Center, among other various projects around the city.

“Mayor George Pat Patterson’s outstanding and long time service to the Oxford community is a legacy to be remembered and celebrated,” Tannehill said.

As Tannehill concluded the resolution, the plaque was unveiled and met with applause and cheers from the audience.

Patterson took to the podium to share a few words with tears in his eyes and a grateful tone in his voice.

“Of course I can’t help but feel honored and humbled by the gesture,” Patterson said. “Let me be clear, the community has given me far, far more back in support and love than I’ll ever be told.”

Discussions to build the road began more than a decade ago. After MDOT refused to fund it, city and county leaders entered into an agreement to split the costs for the road that now extends West Oxford Loop to Old Sardis Road.

Bart Robinson, Chief Operating Officer of the City of Oxford, began the ribbon cutting ceremony Tuesday. Both Tannehill and Circuit Clerk-elect Jeff Busby thanked Robinson for his dedication to the parkway project. 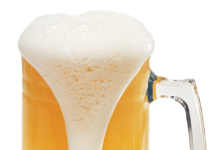