Family and friends of Alexandria “Ally” Kostial, the female Ole Miss student found murdered Saturday morning in Harmontown, spoke out regarding the relationship between Ally and her alleged murderer, Brandon Theesfeld.

Photos began to emerge Tuesday night of them posing together previously at social functions. Kostial was a member of the Alpha Phi sorority at the University of Mississippi.

News outlets report Theesfeld was fleeing Oxford when he was apprehended by law enforcement working with the Memphis Police Department Monday after credit card charges and phone records led the police to a Mobil gas station in south Memphis.

Although no motive has been established, a friend of Kostial tweeted Hottytoddy.com that Theesfeld has been harassing Kostial for years.

Late last night, Jordan Kostial, a family member of the victim, alluded on Facebook that Theesfeld acted out because Kostial rejected him romantically.

“Stop teaching your sons that they deserve anything they want,” Jordan Kostial stated. 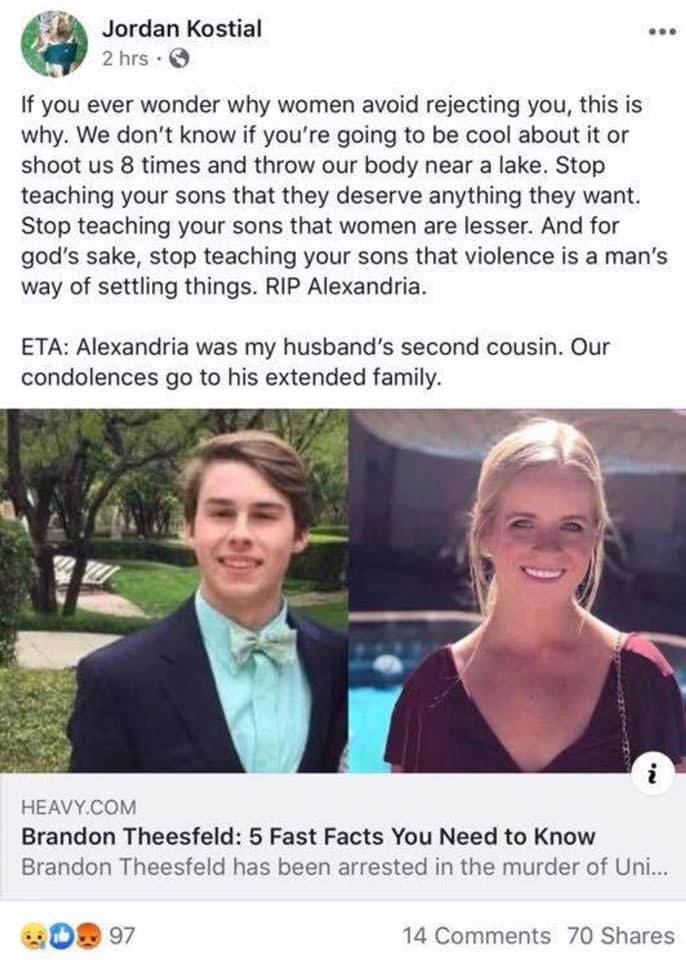 Theesfeld, a native of Fort Worth, Texas, was formally charged with Kostial’s murder Tuesday morning. Following the ruling, Lafayette County Circuit Court Judge Andrew Howorth granted the defense and prosecutors time to work out a date for a bond hearing.

Kostial was found in Harmontown Saturday by a Lafayette County Sheriff’s deputy making a routine patrol.

The Lafayette County Sheriff’s Department said it is “apparent that foul play was involved.”

Wilburn said in a press release Tuesday, that the department will not be releasing details of the investigation as it is ongoing.

“We will release when it is appropriate and not before,” Wilburn said in the press release.

This is a developing story. Follow Hottytoddy.com for updates.