The No. 18 Ole Miss men’s basketball team returns to action on Saturday as they welcome the Arkansas Razorbacks to the Pavilion for a sold-out game. Tipoff is slated for noon on the SEC Network.

The team looks to bounce back from its first conference loss 83-69 to the LSU Tigers on Tuesday. Senior Terence Davis had a double-double with 21 points and 10 rebounds in the contest. The Southaven, Mississippi native has scored at least 24 points three different times versus Arkansas throughout his career.

Arkansas comes to Oxford 10-6 on the season, riding a three-game losing streak in conference play. The Razorbacks opened SEC play with a victory over Texas A&M before falling to Florida, LSU and Tennessee.

This season, the Razorbacks are scoring on average 80.1 points and holding opponents to 73.2 points a game. As a team they have 103 assists and only 26 turnovers.

Saturday’s game will be the 80th meeting between the two schools, with the Razorbacks holding an all-time series lead of 47-32. The series began in 1937. Arkansas won 32 of the first 38 meetings, but Ole Miss has won 26 of the last 41 meetings. Arkansas swept last season’s series with a victory at home (97-93) before winning for the first time at The Pavilion (75-64). The Rebels have dominated the series at home, holding a 19-7 advantage in Oxford.

Prior to the game fans can meet the 2019 Ole Miss softball team. Watch all the action on the SEC Network or listen to the call on the Ole Miss Radio Network. 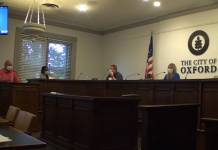