Oxford Film Festival and Southern Foodways Alliance will partner along with Burns Belfry and Lens Collective to host a special movie screening and panel discussion on Martin Luther King Jr Day (Jan. 21) following the MLK Day Breakfast. Starting at 10 a.m. at the Burns Belfry Church—located at 710 Jackson Avenue—the series of short films provided for free to the community will include: 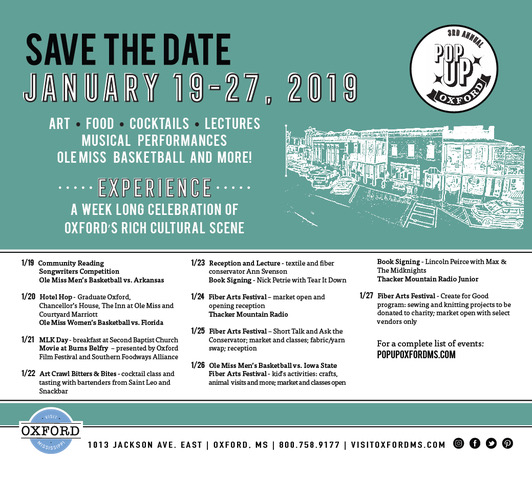 Bright at Night – In Mississippi’s Hill Country, the Foxfire Ranch has been in the Hollowell Family for 100 years. The Sunday evening experience at Foxfire serves up a slice of life in Marshall County, Mississippi, where culinary and musical traditions have always been closely interwoven.

Country Platter – Jimmy Williams has been the owner of Country Platter in Cleveland, Mississippi since 1994. In its history, Country Platter was previously Lilley’s Soul Food Cafe, a meeting place during the Civil Rights Movement for many influential figures including Dr. Martin Lather King, Jr., Ralph Abernathy and Amzie Moore. Today, Williams works to give back to his community, remembering his past to influence his present.

Delta Dreams – A look at the music of the Delta and the new Grammy museum.

Faith, Hope, & Inspiration – Members of the Clarksdale, Mississippi community reflect on the influence of Dr. Martin Luther King’s visit to First Baptist Church during their civil rights struggles in the 1950s and 60s.

Otha Turner – In the late 1950s, fife and drum legend Otha Turner began hosting annual Labor Day picnics at his property in Gravel Springs, Mississippi. Turner would butcher and roast goat, pork, and fish, drawing neighbors with the smell of his cooking and the sounds of his fife and drum.

Vishwesh Bhatt: The South I Love – Vishwesh Bhatt is a southern chef using flavors from his childhood to add to the lexicon of Southern Food. A short film by SFA summer documentary intern Nicole Du Bois.

A full-length trailer of the upcoming Oxford Film Festival will also be played.

Je’Monda Roy, University of Mississippi MFA student will serve as Q&A facilitator with special guests including filmmakers and subjects of the films.

The Oxford Film Festival was founded in 2003 to bring exciting, new and unusual films (and the people who create them) to North Mississippi. The annual five-day festival screens short and feature-length films in both showcase and competition settings, including narrative and documentary features and shorts; Mississippi narratives, documentaries and music videos, and narrative, documentary, animated and experimental shorts. The festival is a 501c3 not-for-profit organization.

For information from the Oxford Film Festival, contact Melanie Addington – 662-801-6007 or email melanieaddington@oxfordfilmfest.com.