Oxford in the early 1950s was not a typical small southern town. Of course, we had some lovely old homes, one-marshal law enforcement, two regular movie theaters and a drive-in, a skating rink, two hotels, a couple of restaurants, great weather, and gentile people. But Oxford was not typical because it was also the home of William Faulkner. Until he was presented with the Nobel Prize for Literature he was just another person who lived on Taylor Road and wrote books. After he gained fame as a writer, people from all over the world suddenly “knew” William Faulkner and started writing about him on a first-person basis. I’m here to tell you that the only people who “knew” William Faulkner were those who lived in the little town of Oxford, and even then most of us only slightly knew him.

When I was in school, my friends and I frequented the roller rink and had a great racing team. I had used my part-time-job money to buy a pair of Chicago racing skates with precision wheels, and they were my pride and joy until the night when one of the laces became untied and locked the wheels as I made a long run down the lane. As a result of the burst bursa, I wore a cast on my knee for a long time. Meanwhile, my first full-time job after graduation was with the Rehabilitation Division of the State Department of Education, and my second-floor office was on the Square above the Bank of Oxford. The stairs leading to it were steep, and I was very clumsy with the cast on my knee.

At that time the post office was on the east side of the Square where the City Hall is now located. Since part of my job was to take the mail to the post office each afternoon, I had to hobble up and down those stairs several times a day. 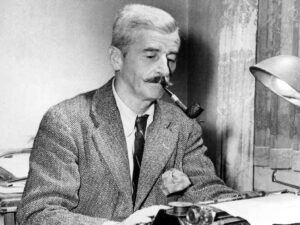 Gathright-Reed Drug Store was just a few doors down from the Bank of Oxford, and it is well known that Mr. Mack Reed often packaged and prepared for mailing Mr. Faulkner’s manuscripts and other papers. One afternoon as I was descending the stairs, hobbling as usual with my cast, a gentleman hesitated on the sidewalk at the bottom of the stairs, and as I approached he reached out his hand for mine and helped me to the sidewalk. I was grateful and said “Thank you.” He didn’t respond but tipped the brim of his hat in acknowledgement. We walked side by side around the Square when it was obvious we were headed in the same direction. The next day when I headed to the post office, Mr. Faulkner was waiting at the bottom of the stairs, tipped his hat, and said “Good evening.” We walked together to the post office and not another word was said. From that time on, when Mack Reed had prepared something for him to mail, Mr. Faulkner would be waiting for me at the bottom of the stairs to escort me to the post office. Sometime we talked (if discussing the weather and the city’s political affairs could rate as “talking”) but most of the time there was just a tip of his hat and a gentlemanly greeting. This went on a very long time, many months after my clumsy cast was removed.

When people new to Oxford ask me if I knew William Faulkner, I always say “no.” I was not a part of his inner circle of fox-hunting friends. I knew his daughter Jill but only as a student in the high school we shared, and there was no reason for him to be so kind or even to notice me. But he did. I am convinced that his reputation as “Count no account” was begun and fueled by some citizens in Oxford because it sounded funny at the time. Remember, most of us have had a nickname at one time or the other and it was not always complimentary. Oxford was a town of less than 5,000 souls in those days, and everybody knew everybody else. Faulkner described it as his “postage stamp” world, and I am convinced that only those few citizens knew Faulkner at all. I had some association with him, but I didn’t know him. I only knew that whatever else he might be, under the ragged tweed coat and under the brim of his little hat, he was a true Southern gentleman. A very gentle man.