On July 20, 2017, at 6:44 p.m. the news broke that former head football coach Hugh Freeze resigned from his position at the University of Mississippi. This announcement shocked and swept across the media and Ole Miss fan base. 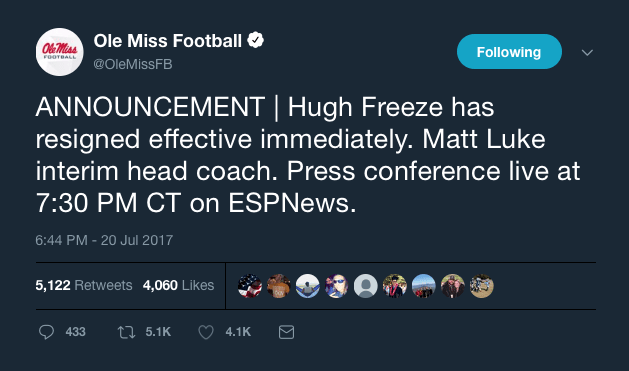 During Hugh Freeze’s five year tenure with the Rebels, he walked into the job and inherited a mediocre 3-10 football team that had just lost 14 straight SEC games and turned it into one of the top offensive powerhouses in the conference. In that time, Freeze led the team to the BBVA Compass Bowl, Music City Bowl, Chick-fil-A Peach Bowl, and Allstate Sugar Bowl, winning three of the four bowls.

Only 44 days away from taking the field against South Alabama at Vaught-Hemingway Stadium, during the peak of a heightened NCAA investigation, the news of Hugh Freeze’s resignation as head coach of the Ole Miss Rebels was unveiled at what seemed to be the worst time. With scandal and speculation around every corner, the rumors rippled throughout the college football world.

The resignation of Freeze was a result of unprofessional actions that ultimately led to an NCAA sanction of lack of institutional control.

Immediately after the resignation, Ross Bjork was on a tight timeline to find the right man for the interim job. He ultimately landed on a true team player, Matt Luke. Luke, a third generation Ole Miss Rebel, smoothly traversed his transition from a fan and player to a head coach.

Luke took over the program two weeks prior to the start of fall camp with defensive coordinator Wesley McGriff as the assistant head coach. During the season, he was able to keep the team’s motivation high and upbeat. Luke and his coaching staff were able to keep the team focused on the upcoming slate and the negative distractions far away from the locker room. Luke went from guiding the offensive line to taking over the whole team and guiding the players through a 12 game slide in the SEC.

On the fifth game of the 2017 season during the Rebs face off against the Auburn Tigers, it seemed as if the wheels began rolling for Luke’s offense and everything was falling into place. With little off-season preparation under Luke, the team began adjusting to the new changes.

Mid-way through the season, the application for the head coach position was released. Unlike other candidates, who only had a one-time interview, Luke was put under the microscope for four months having to prove himself a little more.

Coming off of a 6-6 season and Egg Bowl win, the team and Ole Miss fanbase rallied behind Matt Luke, pushing for him to become the next head coach for the Ole Miss Rebels. With players and other coaches publicly supporting Matt Luke, Ross Bjork had a major decision to make to steer the program in the right direction. 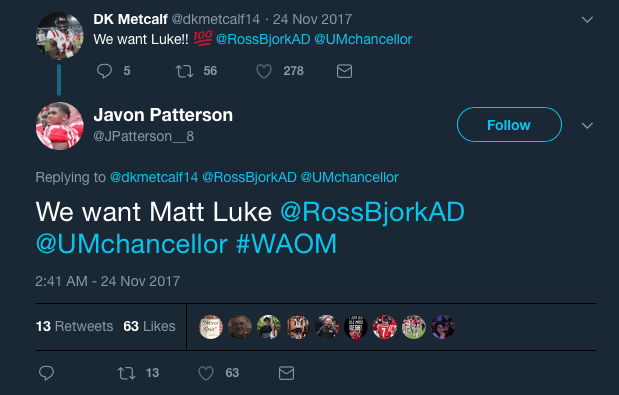 On Nov. 27, 2017, Luke would kiss the interim tag goodbye as he became the 38th head coach in program history.

At the 2018 SEC Media Days in Atlanta, Luke tied the special number 38 (Chucky Mullins’ jersey number) to his experience as coach.

Where We Are Heading

This season looks bright for the Rebels as Luke brought in a top 30 recruiting class to Oxford and is well on the way to a possible top 10 class in 2019. Luke had the whole offseason to implement his style to the offensive playbook.

Ole Miss has Jordan Ta’amu as the quarterback to lead the team after Shea Patterson left for Michigan. A total of 15 players return to play for the Rebels this season.

Luke brings the blue-collar mentality that the O-line has adopted to the whole team — something the players have railled behind.

Luke said he was most impressed by how the team gets up at 6 a.m. every morning and goes to work.

This season Ole Miss is not going to a bowl game, but instead, the players are playing for each other. The Rebels have the NCAA sanctions behind them and can now look to the future for the program.