Ole Miss men’s golfer Braden Thornberry was named the AmateurGolf.com Men’s Player of the Year after turning in multiple top finishes throughout 2017.

“This game has been so special to me,” Thornberry said. “My game has gone to a new level, and I have learned so much.”

A new level it was: Thornberry’s year consisted of titles to three of amateur golf’s biggest championships, to claim the honor by nearly 1,000 points ahead of Doug Ghim of Arlington Heights, Illinois.

Thornberry began his year with two first-place finishes, first at the Jones Cup in Sea Island, Georgia and then the Ryman Hospitality Intercollegiate by 13 strokes. In April, he found top-5 finishes at both the SEC Championship and the NCAA South Central Regional, which advanced him to claim the title at the NCAA Championships, wrapping up his sophomore campaign at Ole Miss.

“This is another outstanding honor for Braden,” head coach Chris Malloy said. “He has continued to work extremely hard even after all of his successes, and this is just the start of a very special golf career for him.”

The NCAA Champion title came with a long list of awards as Thornberry became the first Rebel in Ole Miss history to win the Haskins Award, given to the most outstanding men’s collegiate golfer. He was named a PING Division I First Team All-American, a member of the All-Nicklaus Team, the All-SEC First Team and the PING Southeast All-Regional Team.

Thornberry didn’t stop there. In early June, the Olive Branch, Mississippi, native showed out in his first pro event, the PGA Tour’s FedEx St. Jude Classic, finishing in a tie for fourth, just two shot behind the winner Daniel Berger.

He then went on to shine throughout the summer competing in the Sunnehanna Amateur (won the tournament), the PGA Tour’s Greenbrier Classic, the Pacific Coast Amateur, and the U.S. Amateur before being named to the United States Walker Cup Team, which he would later help his country win.

In the fall of his junior campaign, Thornberry worked victories at both the Shoal Creek Intercollegiate (by eight stokes) and the Franklin American Mortgage Intercollegiate (by five strokes), before he would play in his third PGA Tour event of the year, the RSM Classic.

“Winning the AGC Player of the Year validates all the hard work I have put in this year,” Thornberry said. “I’m looking forward to what 2018 has in store!” 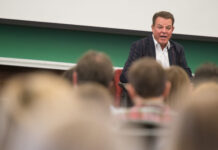 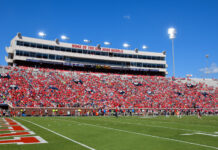