The Yalobusha Giants travel baseball organization has added a Fungoman® to its training regimen. This state of the art machine is being used by MLB teams as well as the elite college programs across the U.S.

The Fungoman operates as a fielding machine or as a pitching machine. It has the ability to run scripted practices, throw fastballs, curveballs, and knuckleballs to any location in and around the strike zone and it can send fly balls suitable for all levels. Currently 89 Universities (D1, D2, D3, NAIA, JR College) have purchased a FungoMan, and some have purchased more than one. Fungo has historically been a way for baseball teams to refine fielding techniques and baseball scenarios. The Fungoman® machine has revolutionized this aspect of practice and replication of real game-time scenarios. The Fungoman allows for coaches to run practices from anywhere on the field. It allows for teams to run more efficient practices by firing a ball every three seconds to the coaches’ desired location. Since the machine can run prescripted practices, it allows for the Giant’s coaches to work on refining particular areas of fielding needed by each player or team.

Romy Cucjen’s recent visit to the Oxford Lafayette Sportsplex was very productive as he and Coaches Russ Pratt and Chip Wade were able to refine practice schedules to maximize the use of the Fungoman.

“Romy was great and has been very helpful by making adjustments to our practice routines,” said Chip Wade, coach of the 8U Yalobusha Giants. “Romy has always been great to work with in designing practices,” added Coach Russ Pratt. “He understands what we are working to achieve for the baseball players in our organization.”

“The Fungoman® allows for our kids to get in as many reps as possible during the practice time. It also provides a way for a much more accurate delivery of the ball to specific areas which helps us run a very efficient practce,” said Russ Pratt, founder of the Yalobusha Giants Baseball organization. “We looked at what the colleges were using to prepare their kids for play, and this was utilized by the elite programs.”

“The Fungoman® has adjustable speeds for pitching as well as for the infield work which allows fielding for all age groups,” said Chip Wade, 8U Yalobusha Giants coach. Wade played at the University of Georgia and stated that most SEC programs have adopted this machine to their practice routines.

“Having tools like Fungoman® make our practices fun! As a coach, it is nice to be able to move around during practice to watch the footwork and positioning of the players, but with traditional Fungo, the coach is usually behind the plate hitting the ball,” Wade said. “We have continued to get interest from top players in Oxford and its surrounding communities. It feels good to know we are providing these kids a great time and teaching the fundamentals of baseball.” The Yalobusha Giants are excited about the initial play of the travel baseball teams and expect a great season.

“We have continued to add great parents and kids to our program. It is fun to watch these kids work hard throughout the offseason,” Pratt said. “Our kids have been working hard. I’m sure a lot of kids spent the winter months playing video games, but these kids worked on hitting in the indoor facility and utlizing great tools like the Fungoman®. The success we had by winning at Disney, has really motivated them. Having our 13U team already win a Super NIT to qualify them for Disney this early in the season, allows them to just relax and enjoy playing baseball. I am just excited about having such good coaches and parents. It should be a great year for the Giants!”

For questions or comments, email adam.brown@hottytoddy.com. 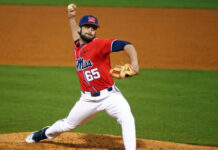