John Waters is a man who wholly embraces absurdities of life. He shared this love of counterculture, and the counterculture within, through nearly all artistic mediums: cinema, photography and writing, all the while graciously accepting titles like “Pope of Trash.”

John Waters will bring some of his carnivalesque delight to the University of Mississippi this week. Tonight at 6 p.m. the students can enjoy two of his movies: the iconic Hairspray (1988) and the dark Serial Mom (1994), the movie where infamous kidnapped heiress Patty Hearst had an acting part, at the Turner Center Auditorium. There will be a raffle with VIP seating for ten students, copies of Waters’ Car Sick – one of the books on 2014 New York Times best-selling list, and a signed movie poster by Waters given away as prizes.

This event is made possible by not only the Sarah Isom Center but the departments of art, English and sociology & anthropology, and theatre arts. The Center for Inclusion and Cross-Cultural Engagement, Southern Documentary Project and Cinema and the Oxford Film Festival and finally the UM Pride Network all helped make these screenings possible.

The event, “Welcome to the World of John Waters,” is just a taste, a tease of this Saturday at the Ford Center where the iconic man who caused decades’ worth of cringes and laughter, John Waters, will deliver a lecture to attending University of Mississippi students and the interested public.

John Waters has never been to Oxford before but he’s as excited as his hosts to see the University of Mississippi and Oxford. He said in a phone interview, “I’m so excited to go [to Oxford]. Everyone that’s been there speaks so very highly of it. There’s a great bookstore there, and it’s a place that I’ve always wanted to go so I’m happy to be coming there.”

He joked that his lecture at the Ford Center isn’t “something you’d want to bring your child to.” He said he thinks he’ll be talking about everything, not just his movies. Rather his movies will be used as a springboard to talk about crime, fashion and politics but that could change. Waters said, “…My limit is how far I can go and I talk about everything, about drugs even, and I’m always changing (the lecture) and adding things.”

John Waters delved a little into his childhood in the 1950s, “the worst decade” he ever lived through. The expectancy of everyone to be like each other suffocated him. When rock and roll exploded through his least favorite decade Waters identified with the rebellious counter culture it left behind. He entered the groovy 60s as a punk kid wearing hairspray caught in a hippie world. Still, as Waters said, he identified being outside of the social norm with the hippies. That formative decade helped him understand the necessity, the emotion of protesting the norm.

He sees this timeless understanding in today’s young generation.

“Do I think the kids are having less fun being hackers than (they) did as hippies? No, I think they’re having as much fun as we have had,” said Waters. “And then you can see it went from being a punk to being a rapper to being a hacker – it’ll always be something, but the difference is today that now so many kids say their parents show me their movies.”

He laughed and said, “When I showed my movies other parents called the police. People have gotten a lot more open, it’s better than it ever was.”

Waters lived a vibrant life with a hard-to-match passion for story-telling using several mediums from cinema to writing to photography. He said, “I do it all separately. I think of the artwork. I made story boards. I write it – I want to tell a story. I love telling stories and it doesn’t matter what genre.”

His passion is reflected in his 16 films, numerous appearances in movies with an episode appearance in The Simpsons’ fourth season, six books authored or co-authored by him in addition to numerous articles he has written for press, and the list goes on and on.

All he has done were out of genuine enjoyment of his work. “The one thing that bothers me is college reporters who ask ‘Do you have a hobby?’ I just think -” Waters paused before saying the next three words with emphasis, “How. Dare. You. Do I look like a dabbler? Only amateurs have hobbies.”

The students who plan to attend his lecture can anticipate advice too. Waters shared some wisdom for the twenty-somethings during the phone interview: “Don’t be afraid of rejection, it only takes one yes, one car to pick you up. Ask everyone and don’t be afraid of no’s.”

The lecture at the Ford Center is at 7 p.m. Free tickets are available via the UM Box Office. This student-inspired lecture is made possible with support from the University Lecture Series, numerous university entities and also private donations.

To learn more about John Waters and his work visit: www.artsy.net.

Callie Daniels is a staff writer for HottyToddy.com. For comments, criticism or compliments she can be reached at callie.daniels@hottytoddy.com. 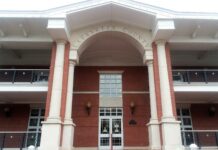 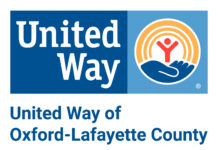 United Way Awards a Total of $15K to Oxford Non-Profits