Editor’s note: This might be seen as the companion piece to our current post on the new Oxford alcohol law changing some time-honored traditions. Well, here in the words and memories of a Hottytoddy.com editor, is the story of another cherished tradition that held fast in the days before free-flowing cold suds.

Quiet and dormant, it sits. A remnant of a long-gone civilization—or lack thereof. You might call it Keystonehenge.

For a generation of young Oxonians seeking access to cold beer and, um, lax ID carding practices in the 1980s and early ’90s, Ben’s & Todd’s store, later called Frazier’s (pictured on the right side of photo) was the destination of many a sojourn “across the river” to Marshall County. The only time the clerk ever asked me for ID—after many previous trips there—I had a stunned look on my face and got a little nervous. Ten seconds later, he died out laughing and blurted, “Nah, man, I’m just kiddin’!”

That was the retail shop; next door was Hotty Toddy’s (left), the metal-building honky tonk, serving up cold beer in cans and providing an ideal venue to get your ass kicked for no apparent reason. It was also a hotspot on the Sunday night after Bid Day at Ole Miss. The bar would flood with frat and sorority kids. Then one year an angry local knocked out the windshields of about 20 cars with a baseball bat. I think that was the last time Bid Day sauntered across the river.

In the early ’90s, Betty Davis Grocery opened, right on Highway 7, offering a much larger selection of coldies than Frazier’s had, along with barbecue and more. It was a little bit closer, not requiring a ride down the road a little farther on the right to Frazier’s, and it soon eclipsed the latter.

I took a detour to Frazier’s and Hotty Toddy’s the other day on my way home from Memphis, just to see if they were still standing. They are there, though completely abandoned. As I drove leisurely toward the site along the quiet country road enveloped in calming greenery, I felt a little excitement, like some hidden reflex, that I was about to get cold beer. I didn’t find beer, but I also didn’t get my ass kicked. — Tad Wilkes 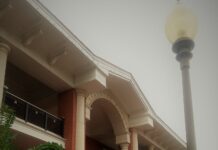