Upon his graduation from Ole Miss, American sprinting sensation Isiah Young has signed a four-year contract with Nike to run professionally.

Young will represent Nike at various track meets each year, including some of the world’s premier athletics contests as part of the IAAF Diamond League. He begins his pro career running the 100 meters this Sunday in Birmingham, England, at the Sainsbury’s Grand Prix, which will feature 11 reigning Olympic champions and 30 medalists from the recent London Games.

As he prepares to compete for Team USA at the 2013 World Championships (Aug. 10-18 in Moscow, Russia), he will run in the 200 meters in Lausanne, Switzerland, on July 4. The Junction City, Kan., native will compete there alongside nine Olympic champions, including former Ole Miss star and reigning women’s long jump gold medalist Brittney Reese.

“I’m excited for Isiah as he becomes the next athlete in Ole Miss track and field history to join the pro ranks,” said Rebel head coach Brian O’Neal. “His agreement with Nike allows him to fulfill his dream to compete as a pro athlete. Coming to Ole Miss, he took advantage of the opportunity to become a college graduate, an SEC champion, an All-American, an Olympian, and now a professional track and field athlete. He will continue to represent the great brand of Nike that has equipped him while he’s been an Ole Miss Rebel.”

Young graduated in May with a bachelor’s degree in criminal justice, while setting record after record on the track. In 2013 alone, Young claimed his second straight SEC outdoor title in the 200 and was SEC runner-up in the 100. After earning the SEC Commissioner’s Trophy as the conference meet’s high points scorer, he was named the 2013 SEC Runner of the Year and 2013 South Region Track Athlete of the Year. He placed second in the 200 and third in the 100 at the NCAA Championships.

Young qualified for the 2012 London Olympics when he placed third in the 200 at last year’s U.S. Olympic Trials with a then school-record 20.12. He made the 200 semifinals in London.

This year, he shattered his previous record with a scintillating 19.86 to earn silver at the USA Championships and earn a spot on Team USA for the World Championships. His time is fourth-best in the world this year and made him the 12th-best American all-time in the 200.

In the 100, Young ran a personal-best and school-record 9.93 in the USA Championships semis to qualify for the finals, where he placed seventh in 10.12.

Young, who will continue to train in Oxford for the next year, is one of only three people to run under 10 seconds in the 100 and sub-20 in the 200 this year. The others are USA’s Tyson Gay and Jamaica’s Usain Bolt, arguably the top two sprinters of all-time. — Ole Miss Sports Inf 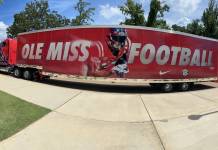