Rain clouds knew better than to sprinkle on a good thing

Who’d a-thunk that not only would downtown Oxford not be awash in thunderstorms but that, save some grey clouds, Saturday, April 27 at the Double Decker Arts Festival Presented by C Spire Wireless would actually be sunny? Oh, Mother Nature tested the crowd for about 10 minutes Friday night, right after Blue Mountain’s first song, but Oxford hung around. From then on, the warm sun shined on a day of art galore, good food, and, of course, an interesting music lineup.

Friday night gave us the undulating grooves and melodies and harmonies respectively of The Eric Deaton Trio and Blue Mountain. The beer got good enough to me that I declined to run in the Spring Run Saturday morning, but I enjoyed a Bloody Mary in their honor. After taking the kids for face painting, slushes, aliens (the outer space kind, not the kind you get angry mass emails about) and the requisite bouncing in the Square Fair area, we headed over to the Double Decker stage.

While I was still chaperoning at the bouncy house, the University of Mississippi Steel Drum Orchestra beat out the beginning strains of the music, followed by Chimney Choir, the Colorado unit featuring onetime Oxonian, multi-instrumentalist Kevin Larkin. Gorgeous melodies and harmonies were the hallmarks of their set. Next up, familiar favorite Shannon McNally and her band were joined by Texas guitarist Will Sexton.

Seems like Double Decker usually has at least one brass band, and this year it was the Stooges Brass Band, buoying the mid-afternoon vibe and lending a little credibility to Oxford’s unofficial moniker, the “Little Easy.” I had to duck out for a bit after that and regrettably missed two acts I was really looking forward to, the Kopecky Family Band and J. Roddy Walston & the Business. So much to do, so little time, they say.

But it would have been a crying shame if I’d missed Lee Fields & the Expressions. Every year there’s at least one act that I don’t know much about but blows me away. This year it was this guy. All I can imagine is that someone was able to blend the DNA of James Brown, Marvin Gaye, and Gary Coleman to create Lee Fields. Tight soul and R&B tunes, passionate singing, and sharp-as-a-tack suits. The Drive-By Truckers stood next to the stage in awe of Fields, and I won’t be surprised if Patterson Hood shows up at their next gig in white zipper boots.

After they spectated the glory of the Expressions, the Truckers were obviously inspired when they took the stage as the festival’s final Saturday act.

Unsurprisingly, the beer was just as cold and delicious as it had been on Friday, eventually guiding me to the Library to watch the Kudzu Kings kill. Original Kings drummer Chuck Siegler took the stool from C. D. Overton to drum and sing two songs, Black Sabbath’s “War Pigs” and the old Kudzu chestnut “Trudy.”

Mother Nature finally got her turn as thunder cracked and the bottom fell out around the time we were headed to a cab, calling an end to one of those days where you just can’t stop smiling.

Drive By Truckers Bring The Heat—Heat Lightning, That Is

Closing out Saturday night of Double Decker weekend, music headliner Drive-By Truckers melted the faces off 3,000 Oxonians. After a beautiful day on the square, the Athens, Georgia-based Southern rock quintet shook the brick lining of Oxford law offices with a two-hour wall of sound. With three electric guitars amped up to eleven (on a 10-digit dial), vibrations could be felt all the way from Highpoint Coffee to Soulshine Pizza Factory. An audience of all ages gathered around the Caterpillar Stage as lead vocalist Patterson Hood boasted lyrics about all things considered Southern.

The Truckers played their final lick, “Hell No I Ain’t Happy,” as heat lightning streaked across the sky, rumbling on in the distance. Ironically, this paralleled Hood’s most recent solo album: Heat Lighting Rumbling In The Distance. The rain held out just long enough for patrons to find the nearest late-night establishment, quenching their thirst after a fun-filled day of music, art, and food.

For those who can’t get enough of the festivities, the Gospel Choir Showcase is at 3 p.m. Sunday, April 28 on the steps of City Hall. — William Fowler is a sophomore in the Meek School of Journalism & New Media at the University of Mississippi 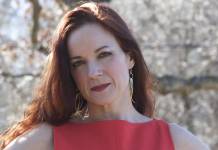