The round up highlights sports on the Ole Miss campus ending the week of Sunday, January 6.

Brittney Reese has been one of her sport’s top performers since shining at Ole Miss from 2007-08.

This year, she cemented her place as one of the world’s best in track and field with a gold medal in the long jump at the London Olympics.

As various media outlets’ year-end stories are being published, Reese is all over the headlines.

The Sun Herald named Reese’s gold medal performance the No. 1 sports story in South Mississippi for 2012.

And for the second straight year, she has been tabbed the Clarion-Ledger’s Sportswoman of the Year, this time sharing the honor with fellow Olympic gold medalist Bianca Knight.

Reese is one of six athletes to ever be named Clarion-Ledger Sports Person of the Year multiple times, including Knight, Steve McNair, Calvin Smith, Larry Myricks and Walter Payton. Other recent honorees with Ole Miss ties include Devin Britton (2009), Houston Nutt (2008), Van Chancellor (2004) and Eli Manning (2003).

Among her accomplishments this year, the Gulfport native became the first American woman to win the Olympic long jump title since Jackie Joyner-Kersee in 1988. She also became the first Ole Miss track and field alum to claim an Olympic gold medal.

She began her journey to global fame when she won the 2008 NCAA indoor and outdoor long jump championships while a member of the Ole Miss track team. In her two-year career with the Rebels, she was a five-time All-American, five-time SEC champion and was named the 2008 Women’s National Field Athlete of the Year by the USTFCCCA.

It is the first SEC Player of the Week honor for McFarland.

Player of the Week

• She also had nine steals in her two tournament games.

• She scored a season-best 20 points and added eight assists against McNeese State.

• A day later against Eastern Michigan she scored a team-best 16 points to go along with a career-high eight rebounds, five assists and five steals.

The Ole Miss Rebels open up in conference action on Thursday. They travel to Baton Rouge to take on the LSU Tigers in the Maravich Assembly Center.  Coach Frank has his squad out to a 7-6 record on the year.  The Rebels are coming off a 61-58 win over Eastern Michigan in the Tulane Doubletree Classic.

The Tigers (9-4) welcome the Rebels to town after an 87-61 win over in-state foe New Orleans on Monday.  Junior Theresa Palisance, who is averaging 18.1 points and 8.4 rebounds per game, leads LSU.

The Rebels are led in scoring by junior Valencia McFarland. She is averaging 11.4 points per game.

This will be the 50th all time meeting between the two clubs. LSU holds the all time record over the Rebels at 28-21.

Tip off is set for 7p.m. The Rebels return home on Sunday to face the Vanderbilt Commodores. The game can be seen at 2:30 p.m., on ESPNU.

The Rebels play host to the Fordham Rams on Friday night.  They are fresh off a 3-1 road trip out west.

Ole Miss (10-2) junior Marshall Henderson leads the team and the SEC in scoring with 17.9 points per game.  He also ranks third in the nation with three-pointers made, averaging 4.1 points per game.

Coach Kennedy’s club went two and one in the Hawaiian Airlines Diamond Head Classic.  The Rebels lost in the first round of the tournament to Indiana State, but bounced back fast with back-to-back wins over San Francisco and Hawaii.

The Rams (4-10) have racked up wins over Princeton, Siena and Monmouth after starting the season 1-8.  Fordham is led in scoring by junior guard Branden Frazier, who is averaging 16.8 points per game.

This is the second meeting between the two schools, with Ole Miss winning the first time they tipped off back in 1982.

The Ole Miss Rebels are set to clash with the Pittsburg Panthers on Saturday in the BBVA Compass Bowl. The match up pits the SEC against the Big East.  The game will be played at Legion Field in Birmingham, Alabama.  Kick off is at noon and can been seen on ESPN. 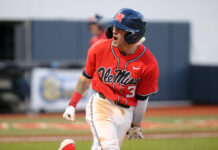