Hankerin’: A desire for something. Think more coconut cake or a bowl game.

Our official Turkey Day has just passed, but for many of us, there’s at least one more turkey on the menu before year’s end. We are most fortunate in the Oxford and Lafayette County community to have access to locally grown and heirloom turkeys.* These locally sourced turkeys exemplify why founding father Benjamin Franklin praised them so highly and wanted to make the turkey our national bird. Wily and mischievous ground birds that tend to roost in trees at night, they are not even in the same food group as those neurotic, pen-farmed creatures sold in the frozen meat section at the grocery store.

Relatives of the grouse subfamily, turkeys were native to our North American forests. Wild turkey subspecies neared extinction early in the 1900s from overhunting, but have been brought back by conservationists. Wild turkey meat is almost all dark, and flavor varies according to seasonal changes in available forage sources. Late-summer wild turkey tastes gamier than winter or spring wild turkey because of the proliferation of insects in the late-summer diet. Wild turkey fed mostly on grain and grass tastes milder, just like free-range domestic turkey.

Modern turkeys can be classified as domesticated turkeys or wild turkeys. The domesticated turkey descends from the wild turkey, but was domesticated at least 2,000 years ago by inhabitants of Mesoamerica, most generally in the regions of the modern Mexican states of Jalisco, Guerrero and Veracruz. Spaniards took the Mexican domesticated turkey back to Europe in 1519, and developed many distinct breeds that spread across Europe and into England by 1524. It is ironic that supply lists of goods to be furnished for New World colonists included turkeys as early as 1584. One historic list of supplies sent from England to Jamestown, Virginia, in 1607, included male and female turkeys!

RECIPE OF THE WEEK

The Old Bride hopes everyone saved the leftover T-Day turkey carcass. If not, go out NOW and get a small turkey! The Old Bride’s father always made up this dish following Thanksgiving. Some of our Lower Alabama friends add Conecuh sausage, Creole tomatoes, Worcestershire, and lemon juice to the mixture. Some folks serve it over leftover cornbread or sausage dressing instead of rice. It’s all good. This gumbo is so rich you must allow naptime after the meal. Freezes well up to one month. Cook turkey carcass about three hours, covered with water in large stockpot with kosher salt, peppercorns, bay leaves, white onions, and celery. Remove from heat and strain, reserving broth and bits. When cooled, pick out and reserve all turkey and the veggies. Discard remaining solids.

Make chocolate-brown roux in large cast iron skillet or Dutch oven by heating oil on medium-high, then quickly stirring in flour, whisking to break down clumps. Whisk about 35 minutes until roux approaches the chocolate stage. NOTE: Roux continues cooking in heated cast iron, so be careful not to overcook. Transfer to larger cooking pot if needed.

Stir in yellow onions, bell pepper, second celery, along with salt and cayenne. Cook, stirring, until veggies are soft. Add sausage and cook, stirring, about 5 minutes. Mix in reserved turkey broth and bring to a rolling boil. Reduce heat to medium-low and simmer another 45 minutes to 1 hour. Stir in turkey and veggie bits, along with optional okra. Season to taste with optional dash of hot sauce. Cook 15-30 additional minutes, until slightly thickened. Serve in bowls with or without optional steamed rice. Top with parsley and green onion. 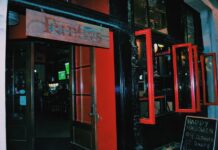