OXFORD — In a letter to a church he had founded, the Apostle Paul made a series of suggestions. One was to “pray without ceasing.” Several years ago, a good friend and I had a long talk about what that meant.

This isn’t Bible study. I’m not schooled or qualified in any way to write about religion.

Our secular government, however, has declared a time for us to observe “Thanksgiving.” I feel OK writing about that, even if the starting point is scriptural.

To “pray without ceasing,” it occurred to me, would be impossible. People have to eat, sleep, work, do other stuff. So I wondered whether Paul really wanted his associates back in Thessolonica to take his advice literally. I concluded that he did, but he didn’t mean “pray” as we tend to pray these days. In other words, he didn’t mean we should make a list of things we want for ourselves or for others and recite it over and over again. He meant, as the rest of his letter indicates, that we have no excuse for anything other than a constant and pervasive attitude of gratitude. Said another way, our lives should reflect an abiding bliss.

Think about it. Regardless of the presence or absence of religious faith in our lives, none of us had anything to do with bringing ourselves into existence. But we are here. Further, we are here for an undetermined (yet finite) length of time, so the question arises as to what we should be doing to make the most of it.

The Rev. Robert Saul, now deceased, was the rector of several Episcopal churches in Mississippi during his lifetime. Among other attributes, Bob Saul looked a lot like the actors usually hired to play Friar Tuck in remakes of the Robin Hood story. He was rotund, that is, and his nose was often crimson.

Toward the end of his days, the Rev. Saul penned a small book and titled it, O, Be Joyful. The point of all the little stories in his book — not distant from the Robin Hood image — was that no matter what we did, slings and arrows would come in our direction. Life is not a cakewalk. That gave us two choices. We could turn inward and be defensive, complaining, hostile. Or, as you may have guessed, we could be joyful.

There is, of course, real sadness in life. There are real tragedies. None of us manage to bounce through life without being zapped by serious adversity.

The question is whether adversity controls us or whether we accept it and move on.

In workplaces, the break rooms or employee lounges can be nests of misery. In many, the “HR” personnel will have placed “happy face” and inspirational posters on the walls, but those rooms are magnets for malcontents. Seriously. The “I hate my job” forces can be strong. One person will fuss about a coworker who sneezed on her; the next about the lack of company-supplied tissue and one-upping soon blossoms into full force. Pretty soon the whole room is in an uproar over the price of sodas and snacks. Having worked themselves into outrage over all the unfairness in their lives, they venture back to share their general unhappiness with all they encounter.

The well-known 1950s movie Pollyanna was about a little girl who changed the outlook of a whole town simply by being cheerful. The message of this column is not to be smarmy, fake-happy (not that Pollyanna was) or to pretend there’s no such thing as hard times or cruelty. The message is deeper.

Being grateful is not a natural reflex for a lot of us. For some reason, we tend to feel entitled when good things come our way and as if we’re being punished any time we encounter difficulty.

It takes work to develop an attitude of gratitude. It takes both recognition of our limits as human beings, and it takes persistence because the forces of pessimism are never far away.

It is, however, worthwhile.

In the same letter, Paul, by the way, also advises his friends to be thankful for all things and, quite simply, to rejoice.

His “pray without ceasing” is a similar suggestion except that it advises approaching every minute of every day with a sense of appreciation that permeates everything — that sets a person’s posture, his or her outlook on life. An attitude of gratitude can change how a person thinks.

It’s a good goal to adopt — or at least consider — during the “official” Thanksgiving season. 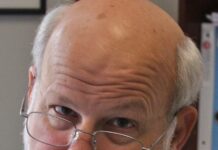 Mitchell: Thanks? How about a List of Aggravations Instead?