Ole Miss Athletics’ video team, Ole Miss Sports Production, has created Emmys-winning footage of all sports within “The Season.” It’s not the only sports video production team in Oxford, though. Oxford High School has had Oxford High Sports Production for less than a year, and the two-man team has won an Emmy Award.

Oxford High Sports Production (OHSP) has won the Southeast Student Production Emmy Award for 2016. There will be a special reception this Saturday, June 11, in Atlanta, Georgia, honoring the 2016 winners. Among the honorees are Andrew Gardner and Merrick McCool, the two-man team that has put OHSP on the map in the Southeast, at very least.

According to Andrew Gardner, OHSP has been operational for as long as the school year from fall 2015 to spring 2016, falling just a few months short of a year.

Gardner said, “(OHSP) is like the first thing that every really happened like this at our school. We approached our principal and vice principal and said, ‘This is our idea and hopefully y’all can fund it and give us some time to work on it.’ and they said yes.”

After around nine months and 15 videos profiling the OHS Chargers’ baseball and football teammates (including a video on ping pong), Gardner and McCool began applying for awards. Gardner shared that they had to specially apply for the Emmy award.

“When we applied for awards that the journalism department classes usually apply for, they really did not fit anything that we did,” Gardner said. “So we had to look outside the box and think outside the box for other awards that might fit. That’s when we thought the Emmy fits exactly what we were looking for because it has a category called ‘Sports Production.’ We entered and won, and now we are entered into the national competition for the Emmys later this fall.”

Gardner and McCool are grateful for the support from Oxford High School administration, especially from Principal Bradley Roberson. Gardner said, “Principal Bradley Roberson has been really helpful. They have been very gracious and proud of us. The award came to our school and we opened it in front of a few principals. They were incredibly proud, gracious and nice. It was a really great moment.”

Oxford High School principal Bradley Roberson said in an email: “As a school leader, you desire for your school to have a positive brand within the local community and state. Andrew and Merrick’s work with ‘The Season’ has displayed their talents as well as created a positive brand for OHS. I am very proud of them both for their accomplishment. To win an Emmy Award their first year is a wonderful tribute to their handwork, dedication, and love for their craft and their school.”

Upon starting out, Gardner and McCool talked to the Ole Miss Sports Production’s Chris Sabo and Micha Gin. Gardner said, “They were really helpful and told us what to look for. They helped us out by telling us, ‘This is what you need, how you need to do it and hopefully that you can do it.'”

Gardner has a background in theater. “I have done a lot of plays and musicals and things like that,” he said. “But this is my first project working on editing and show production and curating a final product.”

Gardner and McCool began with filming football when McCool came to Gardner with an idea to make a “tv-style series” of Oxford High School’s football and baseball teams. “We took that and just ran with it,” Gardner said.

McCool said he has “always been around or in front of the camera,” so when they began working together to form Oxford High Sports Production he loved the work. McCool said that in the budget next year will be for better cameras. Gardner added that they will have one person joining the team next year.

Gardner said, “We are trying to create a bigger staff with manageable growth, but we want to keep it small because it’s a lot of work and we really want people who are invested into it. People who are serious and keeping the tradition alive that we have created.”

He admitted that with two people currently on the team the task of producing different “The Season” of a variety of OHS sports would be difficult, but he said that when the OHSP team grows, there could be more than two sports featured in “The Season” at Oxford High School.

Gardner said, “I think we really did have a pretty good year.” 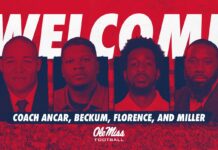